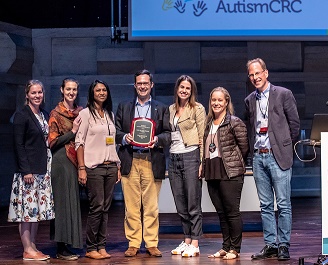 Archives2263
Researchers from the University of Cape Town’s (UCT) Department of Psychiatry and Mental Health recently received two prestigious international awards for their work on autism...

Researchers from the University of Cape Town’s (UCT) Department of Psychiatry and Mental Health recently received two prestigious international awards for their work on autism spectrum disorders. This places a global spotlight on the important work being done by Professor Petrus de Vries and his research team at the Centre for Autism Research in Africa (CARA).

Autism spectrum disorder (ASD) is a neurodevelopmental disorder seen in 1–2% of people and is associated with difficulties in social interaction and communication, and a pattern of repetitive and ritualistic behaviours. ASD is recognised by the World Health Organization as a global public health concern, but in Africa very little research has been done and clinical services for families who live with ASD are extremely limited.

The International Society for Autism Research (INSAR) awarded the CARA team the inaugural Cultural Diversity Research Award at the society’s May 2018 conference in Rotterdam. The purpose of the award is to recognise and support investigators or teams who conduct community-based or community-partnered research that leaves a lasting impact on under-served and under-researched communities.

Professor De Vries, who is the head of CARA, was also elected as an INSAR Fellow at the conference.

The fellowship honours “distinguished members of INSAR whose research has made a significant international impact on the scientific understanding of autism spectrum disorder, clinical practice, educational methods and/or policy”.

“These awards speak to the tremendous work that the Division of Child and Adolescent Psychiatry has initiated in this key area.”

“These awards speak to the tremendous work that the Division of Child and Adolescent Psychiatry has initiated in this key area,” said Dan Stein, head of UCT’s Department of Psychiatry and Mental Health.

Professor De Vries lauded his team for their outstanding work.

“I was delighted by this international recognition of the outstanding work done by my wonderful team. We really believe that research is about working together and collaborating with passionate and positive international partners. Without this teamwork, none of our work or achievements would have been possible,” he said.

CARA is an interdisciplinary clinical research programme based in the Division of Child and Adolescent Psychiatry at UCT. Most information about autism spectrum disorders (ASD) comes from research in high-income countries, often within Europe, the United Kingdom or the United States of America. However, most people with ASD live in low- and middle-income countries. CARA was founded to reduce the “knowledge gap” and work to understand and meet the needs of people with ASD living within Africa.

“I am particularly pleased that these awards demonstrate the international recognition that autism is a global public health concern given the enormous burden of autism spectrum disorders, particularly in Africa and other low-resource settings,” said Professor De Vries.

“I am delighted by the international recognition of our autism research, but given the enormous burden of ASD, particularly in Africa and other low-resource settings, we all have much to do!”