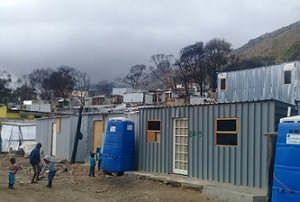 Stellenbosch University’s fire engineering research unit, led by Dr Richard Walls, has received a grant of R4.3m from the UK based, Engineering and Physical...

Stellenbosch University’s fire engineering research unit, led by Dr Richard Walls, has received a grant of R4.3m from the UK based, Engineering and Physical Science Research Council (EPSRC).   The unit is collaborating with the University of Edinburgh’s BRE Centre for Fire Safety Engineering (CFSE) with a shared commitment to socially-integrated engineering for the effective, safe and sustainable solutions for reducing the impact of fire hazards to informal settlements.

Large-scale informal settlement fires occur regularly in South Africa and worldwide, where approximately one billion people live in such settlements. Extensive research that has been conducted by social scientists, geographers, disaster management and associated fields, but very little engineering research has been conducted  to investigate factors such as fire spread rates, fuel loads, fire modelling, testing of alternative construction materials, requirements for fire breaks, the amount of water required to extinguish fires, etc.

The unit undertook a pilot project in 2016, which involved full-scale burn tests on shacks to understand how they burn, along with identifying suitable fire or smoke alarm technology. This was undertaken in collaboration with the Western Cape Disaster Management, Fire & Rescue Services. The Research Alliance for Disaster and Risk Reduction (RADAR), based in SU’s Department of Geography and Environmental Studies, is now monitoring the implementation of the project. The research results justified the roll-out of 1400 photoelectric smoke alarms in the Wallacedene TRA informal settlement in Cape Town, with the roll-out being sponsored by Santam. Feedback from the settlement is showing that the smoke alarms have already saved lives.

As an exciting next step the SU unit in conjunction with the University of Edinburgh (one of the leaders in fire engineering research) have embarked on a large scale project to test, understand, and develop engineering methods for predicting and reducing fire spread in informal settlements.

Western Cape Disaster management will offer the testing facilities, provide input and guidance as well as smoke alarms. The research will be informed by participatory workshops, where members of the community work with researchers to critique strategies and knowledge, and develop realistic and effective recommendations.

This research has the potential for large application in countries like South Africa, India, Mexico, South America and Asia, as well as refugee camps, to ameliorate the risk and impact of fire.