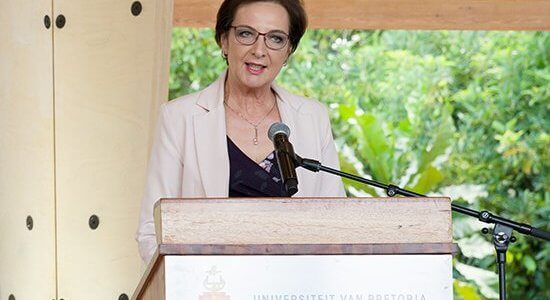 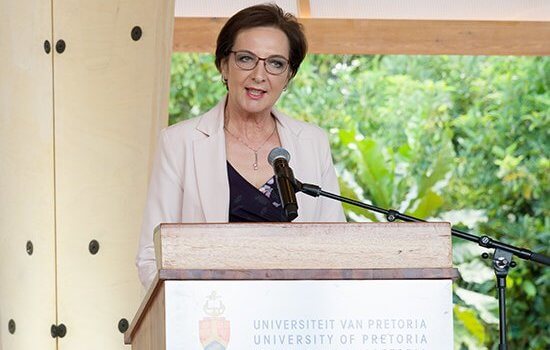 Vice-Chancellor and Principal Professor Tawana Kupe recently hosted a farewell cocktail party at the Future Africa institute and campus to honour Professor Stephanie Burton – but do not for one minute think she is leaving the employ of the University of Pretoria. Far from it. Nor is she even thinking of retiring.

Spend even five minutes with Prof Burton and it’s clear she is brimming with energy and enthusiasm for all the projects she is an integral part of, and that it would be impossible to keep her away from the university.

The function was held to mark the end of her two terms as Vice-Principal for Research and Postgraduate Education. Vacating the position coincided with the start of the COVID-19 pandemic and lockdown, and the function to bid her farewell in that role had to be postponed for nine months.

Prof Burton tackles everything with gusto. So it comes as no surprise that she is not only an accomplished academic but also a leading player in higher education organisations. A professor in Biochemistry and also at UP’s Future Africa institute and campus, she has been a National Research Foundation B-rated scientist, that is, an internationally acclaimed researcher.

Outside of the university, she is Vice-President of the Academy of Science of South Africa (ASSAf) and, although she doesn’t mention this aspect of it, the first female president in the history of the 112-year-old Royal Society of South Africa, an organisation that aims to influence and promote excellence in scientific progress.

She was also instrumental in setting up the Africa Research Universities Alliance (ARUA), a network of 16 leading African universities. And, for the nine years she was the Vice-Principal in charge of research at UP, she delighted in being a member of the Deputy Vice-Chancellors (Research) Forum (a Deputy Vice-Chancellor, or DVC, being the equivalent of a Vice-Principal), which she described as “the club for DVCs of research”.

Prof Burton said she loved interacting with other organisations, and representing UP on different forums. “These are highlights, the things that make an academic career special, that make you feel that you have achieved something,” she says. “You have an opportunity to give back and to use your experience to feed back into the system.”

Her biggest achievement in the position she came to UP for, back in 2011, is the way research blossomed under her leadership. Aided by a strategic plan to develop its research intensity, UP’s research publications doubled between 2012 and 2019, and its academics’ research outputs per capita are now the highest in South Africa.

“Over the period of time that I was DVC we increased our research productivity significantly,” she says. “There are many aspects to that, but if you look at the indicators of research output, impact and quality, we made a lot of progress in that time. That was really very satisfying to watch.”

With her love for the academic world, and her remarkable insight into all aspects of higher education – whether it be leadership, trends in internationalism or science education – it is surprising to hear she didn’t set out to be an academic.

Armed with BSc Honours and a postgraduate certificate in education from what was then the University of Rhodesia (now Zimbabwe), she and her husband moved to Grahamstown (now Makhanda) with two small children, and she taught science, maths and biology at Kingswood College and later Victoria Girls’ High School.

True to form, she did well – becoming the senior science teacher at Victoria Girls’ – and loved her work. Yet 13 years later, she seemingly ambled into academia: “You ask yourself ‘what’s coming next?’ And Grahamstown being a very academic town, and a lot of my friends being at Rhodes, I thought maybe I should go back and do that master’s degree. Once I got into that, I went on and completed a PhD.”

Now she is relishing every moment at Future Africa. She was the member of the Executive in charge of making it operational, a task that took some years, until it launched in 2019.

“You have to see the place to understand just how special it is,” she says. “You can see pictures on the website, but it is a really unique campus. The model is transdisciplinary research, which should be inclusive. It involves students at all levels, people from all disciplines, working together, and is all about excellent research to solve Africa’s challenges. It makes for a really interesting teamwork approach. I like to work in a team. And this is the ultimate team.”

Prof Burton is a powerhouse of note. Experiencing first-hand the impact of how COVID-19 and lockdown have hampered university research – her own six-month sabbatical had to be put on hold because of that – she didn’t just contemplate it, but delved deeper and co-wrote articles published in the South African Medical Journal and The Conversation about the topic.

She has also liaised with government departments, including the Department of Planning, Monitoring and Evaluation, advising them on their country report on the COVID-19 government response.

Perhaps one of the secrets to her string of achievements is the early start to her days – it is not unheard of to receive an email from Prof Burton literally at the crack of dawn, even if that is at 4:42am. Perhaps it’s her work-life balance – she is married to Prof Don Cowan, Director of the Centre for Microbial Ecology and Genomics at UP, and is a grandmother of six. Perhaps it is her graciousness. She consistently stresses that she has not done anything single-handedly and thanks the deans, and all her other “allies”, as she refers to them.

The chapter on Prof Burton and her academic accomplishments is far from closed.- Author Gillian AnsteyPublished by Hlengiwe Mnguni 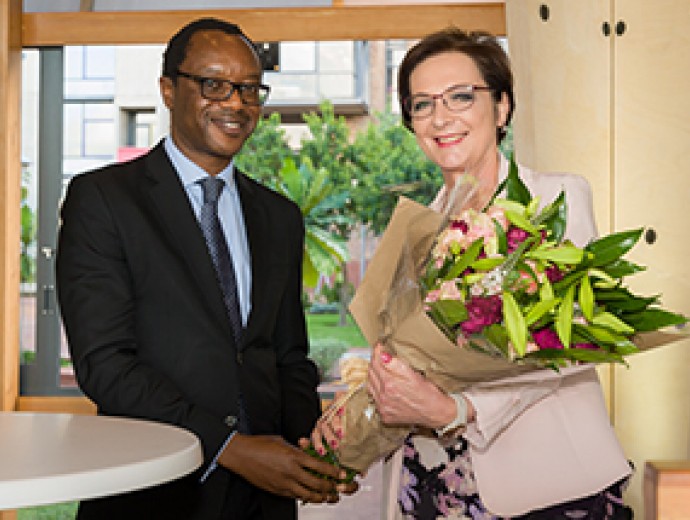