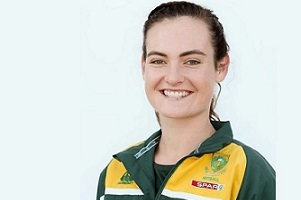 A Matie, a Southern Sting and now a Baby Protea. Goalkeeper Stephanie Brandt (21), who has represented Maties on the netball court since her first...

A Matie, a Southern Sting and now a Baby Protea.

Goalkeeper Stephanie Brandt (21), who has represented Maties on the netball court since her first year in 2015, will represent South Africa at the Netball World Youth Cup in Botswana from 8-16 July. The tournament is held every four years.

South Africa is in Group B with Australia, Barbados, Singapore and Zimbabwe and will play their first match against Barbados on Saturday 8 July.

Stephanie, a former learner of Paarl Girls High and currently an education (BEd) student at Stellenbosch University, is very excited about this opportunity.

“It is a great honour to be able to represent South Africa. I worked very hard to achieve this and my dream came true.”

Three other Maties – Charmaine Baard, Jo Prins and Sasha-Lee Petersen – were also part of the team that helped South Africa qualify for this tournament last year.

“Our goal is to end the tournament as one of the top three teams. We will be playing against some of the best teams in the world, like Australia and New Zealand, but I believe we can achieve a top-three finish.”

Her inclusion in the SA U/21 team as well as Maties’ progression to the final of the Varsity Netball tournament in 2015 are some of her most treasured netball highlights.

“Although we lost that final we grew tremendously as a team,” she recalls.

She would encourage any young netball player to stay involved with the sport when they come to university.

“Netball creates so many opportunities. You learn to prioritise, find a balance in your life and handle pressure, on and off the court. You meet new people and make new friends. I also enjoy the team spirit and the opportunity to see and experience new places.”

Sport keeps this prospective teacher very busy. She spends up to three hours a day on netball training, due to the fact that at certain times of the year she also represents the Southern Stings, a regional team participating in the Brutal Fruit Netball Cup, as well as the Western Cape team.

“A netball player must learn to prioritise and get by with only the necessary amount of sleep. I also depend on the help and support of friends and family.”

Besides her dream to be selected for the senior Proteas team, Stephanie also hopes to make a difference in the lives of young learners one day – on the sports field as well as in the classroom.