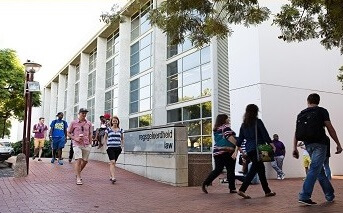 UP Law publications ranked top 200 in the world

Archives2263
The 2018 Academic Ranking of World Universities (ARWU), which was released on 15 August 2018 by ShanghaiRanking Consultancy, indicates that the Faculty of Law at the...

The 2018 Academic Ranking of World Universities (ARWU), which was released on 15 August 2018 by ShanghaiRanking Consultancy, indicates that the Faculty of Law at the University of Pretoria, based on publications, are ranked top 151 to 200 in the world.   This is an impressive feat, given the fact that as of July 2018, there were 28 077 universities registered in the world.

According to the website of Academic Ranking of World Universities, ARWU has been presenting the world Top 500 universities annually since 2003 based on transparent methodology and objective third-party data. ‘ARWU is recognised as the precursor of global university rankings and the most trustworthy one.’
In a letter of appreciation to staff members, deans André Boraine and Birgit Kuschke expressed their ‘appreciation and gratitude for staff members’ continuous contributions to move TuksLaw UP the ranking ladder.’
By Elzet Hurter
Source University of Pretoria
About author