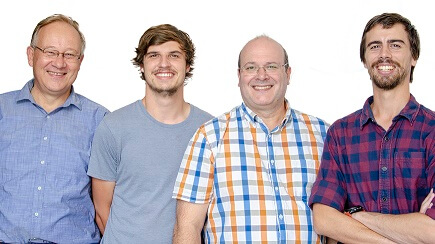 Genetic blueprint for extraordinary wood-munching fungus from the Northern Cape

A relatively unknown fungus, accidentally found growing on an Acacia tree in the Northern Cape, has emerged as a voracious wood-munching organism with enormous...

A relatively unknown fungus, accidentally found growing on an Acacia tree in the Northern Cape, has emerged as a voracious wood-munching organism with enormous potential in industries based on renewable resources.

The first time someone took note of Coniochaeta pulveracea was more than two hundred years ago, when the South African-born mycologist Dr Christiaan Hendrik Persoon mentioned it in his 1797 book on the classification of fungi.

Now C. pulveracea has had its whole genome sequenced by microbiologists at Stellenbosch University (SU) in South Africa, and henceforth made its debut in cyberspace with a few tweets and a hashtag. All because this relatively unknown fungus has an extraordinary ability to degrade wood – hence the descriptor “pulveracea”, meaning powdery.

In the age of biotechnology, biofuels and the usage of renewable raw materials, this is an important fungus to take note of, says Prof Alf Botha, a microbiologist in the Department of Microbiology at SU.

Over the past 25 years, there has been a number of reports on the ability of species in the Coniochaeta genus to rapidly degrade lignocellulose into fermentable simple sugars. But thus far Prof Botha’s lab is the only one to be working on C. pulveracea.

The work started in 2011, when he quite randomly snapped a brittle twig, covered in lichen, from a decaying Acacia tree. At the time, he was holidaying with family on a farm in the Northern Cape. “At the time we were looking for fungi and yeasts that can break down wood, so I knew this was something special when I decided to keep the twig,” he explains. But to date, despite numerous attempts, they have not been able to find it again.

However, back in the lab there was great excitement when they observed that this species in the Coniochaeta genus was literally munching its way through birchwood toothpicks. Even more astounding was its ability to change form between a filamentous fungus and a yeast, depending on the environment.

“This is highly unusual for a fungus. We’d typically expect this kind of behavior from some fungal pathogens,” explains Botha.

Over the past decade Botha and his postgraduate students focused on unraveling this yeast-like fungus’ behavior. In 2011 Dr Andrea van Heerden found that it produced enzymes that degraded the complex structures of wood into simple sugars, feeding a community of surrounding fungi that do not have the ability to degrade wood. In 2016, she published the results of her investigation into its ability to switch to a yeast-like growth. Understanding this process would be important to the potential use of this fungi in industrial processes.

In the latest study, MSc student CJ Borstlap worked with Dr Heinrich Volschenk , an expert molecular biologist, and Dr Riaan de Witt from the Centre for Bioinformatics and Computational Biology at SU, to produce the first draft genome sequence of C. pulveracea. With a genome size of 30 million nucleotides and over 10 000 genes, this was no easy task. In the process he picked up the necessary coding skills to identify and name all 10 053 genes, and to identify those responsible for the wood-degrading character of the fungus.

Volschenk says the next step is to understand the fungus’ mechanism of breaking down wood and producing sugars on a molecular level: “With the genetic blueprint now available, we can study the network of genes and proteins the fungus employs to convert wood and other similar renewable resources into more valuable products,” he explains.

The sequence data for C. pulveracea have been deposited at the DNA Data Bank of Japan (DDBJ), the European Nucleotide Archive (ENA) at Cambridge, and GenBank in the United States of America, under the accession number QVQW00000000 and is freely available to all researchers in this field.

The article “Draft Genome Sequence of the Lignocellulose-Degrading Ascomycete Coniochaeta pulveracea CAB 683” was published in the American Society for Microbiology’s journal Microbiology Resource Announcements on 3 January 2019 and is available online at https://mra.asm.org/content/8/1/e01429-18

Virtual interviews are here to stay

Get the most out of your tertiary open day visit

6 emerging workplace trends : rising to the challenges of change