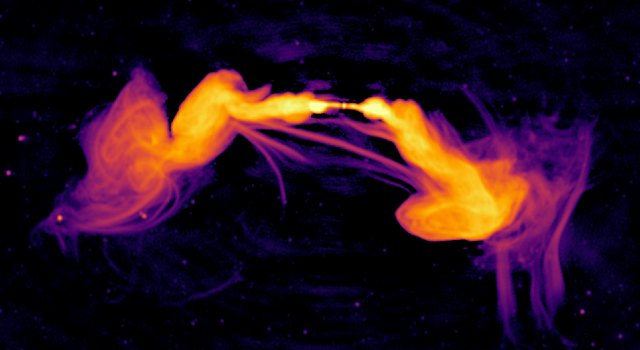 Astronomers stumble upon unexpected features in a distant galaxy

An international team of astronomers, including astronomers from Rhodes University, has uncovered unusual features present in the radio galaxy ESO 137-006, using MeerKAT.  Launched...

An international team of astronomers, including astronomers from Rhodes University, has uncovered unusual features present in the radio galaxy ESO 137-006, using MeerKAT.

Launched in 2018, the South African MeerKAT radio telescope aims to answer fundamental astrophysical questions about the nature of objects in the Universe. It is a precursor to the international Square Kilometre Array (SKA) telescope.

ESO 137-006 is a fascinating galaxy residing in the Norma cluster of galaxies and one of the brightest in the southern sky at radio wavelengths. It is characterised by two very bright lobes of radio emission that are bent in one direction. “New features have been uncovered in this galaxy in the form of multiple collimated synchrotron threads (CST) connecting the lobes of the galaxy,” explained Dr Mpati Ramatsoku, a Research Fellow at Rhodes University and lead author of the study.

The classical picture of a radio galaxy consists of a core (hosting a supermassive black hole), shooting out two jets of plasma at speeds close to the speed of light. The material within the jets eventually slows down and billows out, forming large radio lobes. What makes ESO 137-006 different is that there appear to be multiple, additional close-by filaments linking the lobes, which could have formed at the same time, but do not seem to be associated with the core.

“This is exciting because we did not expect it at all,” said Professor Oleg Smirnov, SARChi SKA Chair for Radio Astronomy Techniques and Technologies at Rhodes University. “Such serendipitous discoveries are very important for MeerKAT because they highlight its incredible capacity for finding the ‘unknown unknowns’ in our universe.”

According to Prof Smirnov, this is in contrast to many of the big discoveries these days that tend to be planned and almost expected. “You have large teams, with a lot of funding, working for many years towards a planned goal (finding a ‘known unknown’). This is just the way big science is done.”

He cites last years’ first image of the black hole at the centre of M87 (in which Rhodes University was also involved), the discovery of gravitational waves, and the Higgs boson as examples of such ‘known unknowns’.

“That’s not to say such achievements are any less awe-inspiring, however,” he clarified. “But I think finding something completely unexpected, like what we see at ESO 137-006, is very exciting, romantic even, and it reminds many of us of the reasons we got into science in the first place.”

The nature of these unusual features, said Dr Ramatsoku, is unclear. Although the team, composed of collaborators from South Africa and Italy, do have speculations, further observations and theoretical efforts are required to clarify the nature of these newly discovered features.

If the latter is true, it brings up questions such as: ‘How common are these features in radio galaxies?’, ‘Why are they this way?’, and ‘Why do they exist in the first place?’

According to Dr Ramatsoku, understanding the nature and the physics of these features could open a new science case for sensitive radio interferometers like MeerKAT and in the future, the SKA.

The article based on this study has been published in the Astronomy & Astrophysics journal.

“Rhodes University may be small, but it only goes to show that you don’t need to be a big university in a big city to do world-leading science,” Prof Smirnov stated.

He credits Rhodes University’s Professor Justin Jonas, who has been at the University since his student days, for making the MeerKAT happen and for bringing the SKA to South Africa. For his hard work and achievements in radio astronomy, Prof Jonas was awarded the VC’s Distinguished Achievement Award in 2019.