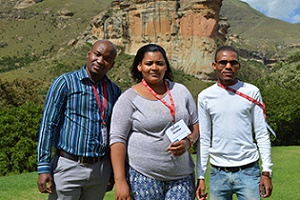 Afromontane Research Unit Colloquium1 Archives2264 research50 researchers1
Jacob Mabena, Dineo Modise, and Zama Shandu are some of the young and brightest researchers on the Qwaqwa Campus. This was confirmed when their posters,...

Jacob Mabena, Dineo Modise, and Zama Shandu are some of the young and brightest researchers on the Qwaqwa Campus. This was confirmed when their posters, summarising their research, were selected as the best during the Afromontane Research Unit Colloquium.

“Golden Gate is fairly unique in keeping both wildlife and livestock. Transmission of helminthic parasites between wildlife and livestock can occur in areas where grazing and water is shared. Such transmissions of disease among these two animal groups can threaten either livestock or wildlife. The effects of parasitic infections in animals result in reduced quality and quantity of products such as milk, meat, wool, and the reproduction of the infected animals. The study will document seasonal prevalence of helminthic parasite infections and will be of value in developing surveillance strategies for helminthic infections by the veterinary authorities in the region,” said Mabena, a master’s degree student in Veterinary Technology.

Ungulates reaction to traffic on the road
Modise’s research area for her BSc Honours in Life Sciences (Behavioural Ecology) was on road ecology and how the behaviour of ungulates is affected by a regional road (R712) running through the GGHNP.

“The study is on the behaviour of ungulates such as zebra, springbok, blesbok, and black wildebeest and how the presence of the road affects them. It also explores how their behaviour is affected by the topography of each site.”

Shandu’s study was aimed at finding the most effective treatment method between uprooting and fire in order to control Serephium plumosum, commonly known as slangbos, in the GGHNP. Shandu, an MSc Environmental Geography student, concluded that uprooting was the best strategy to control slangbos encroachment in grasslands.

“Although uprooting is best, fire can still be used where control is critical and urgent, since it takes less time. But going forward, the study has shown that it would be important to find proper chemicals that would be cheaper and safer to use,” he added.