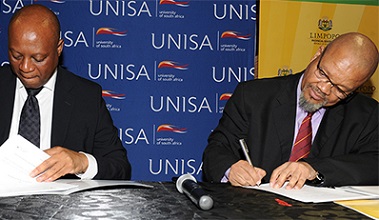 Unisa and the Limpopo Province government will be working together to improve capacity in the province. The signing of a memorandum of understanding (MoU)...

The research agenda will focus on areas such as skills development, infrastructure development and management, economic growth, addressing poverty and inequality, and improved service delivery.

Speaking at the signing ceremony, Unisa Principal and Vice-Chancellor Prof Mandla Makhanya said that Limpopo was a great province that had and continued to play a significant role in South Africa. “If universities are to decolonise and Africanise our education, then Limpopo is one of the places to start with, given its rich and diverse heritage.” He committed Unisa as a partner who would work with the province to realise its provincial strategic and developmental goals. 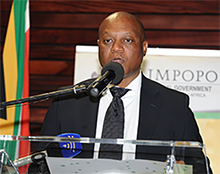 The MoU is the culmination of a period of talks and negotiations starting in 2016. It is valid for three years with the option to renew. It subsumes earlier agreements between Limpopo Provincial Treasury and Unisa’s College of Economic and Management Sciences (CEMS). The parties agreed that it should be extended to all the departments of the Limpopo Province and all Unisa colleges.

The Premier of Limpopo, the Honourable Chupu Mathabatha, whose address was delivered by MEC Seaparo Sekoati, said that his government’s collective task was to use such collaborations in order to bridge the gap between the work done by academic institutions and the work done in government.“Our guiding philosophy should always be about a shared desire to use our knowledge and experiences to help better the lives of our people. It is for this reason that this MoU cannot afford to become yet another document of mere symbolic significance—the aspirations of our people demand that we make this MoU a living document.”

The agreement includes cooperation between Unisa and the Limpopo government on research and the sharing of information. This also means that they will cooperate when necessary to apply for research grants and investigate other avenues for financial and other support such as governmental agencies and private organisations. Unisa will assist the province in organising and prioritising its research requests and initiatives.

On the research side the university will assist with capacity-building initiatives that include research in provincial fiscal policy reforms, budgeting, cost-effective procurement, service delivery models, public-private partnerships, the introduction of innovation and technology, and many more. At the same time the engagement with the different departments in Limpopo should enhance the university’s tuition and lead to a more scholarly engaged approach. 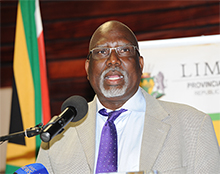 According to Prof Thomas Mogale, CEMS Executive Dean, it was important that an education institution like Unisa should engage with the society in which it functioned and that it should strive to make a difference. Engaging with the community was beneficial to all parties as they cooperated towards improving the lives of the citizens.

Unisa representatives at the ceremony included chairs of departments and research professors. They were part of a technical team meeting with staff from the Limpopo province after the signing ceremony. The team was expected to start the work immediately by setting up an agenda with deadlines. As soon as work got underway, the team would be responsible for compiling quarterly reports on the progress being made.

The agreement involved not only CEMS, but all Unisa colleges and institutes, Mogale emphasised. It was an agreement that allowed everyone to make a meaningful contribution and to reap the benefits from the collaboration agreement.

Prof Moloko Sepota, Unisa-North Eastern Regional Director, said that the region had active partnerships with public libraries, schools, TVET colleges, and some municipalities throughout the province. “We are able to offer physical access to our students through these entities…As an open, distance, and e-learning (ODeL) institution, offering physical access is one way of reducing distance between our students and the institution and we appreciate such opportunities. This is exactly why we need partnerships more than ever before,” he concluded.