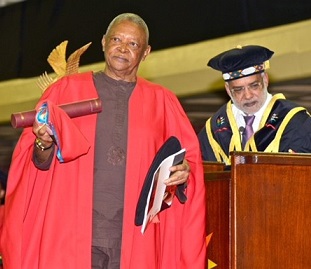 Archives2263
It is with sadness that we received the news of the passing of world-renowned music legend and political struggle icon Dr Hugh Masekela. This...

It is with sadness that we received the news of the passing of world-renowned music legend and political struggle icon Dr Hugh Masekela. This son of Africa has spawned a generation of knowledge producers and musicians who have contributed to the teaching and practical knowledge of jazz and popular music in South Africa and globally.

In recognition of Hugh Masekela’s outstanding contribution to the music industry, the University of KwaZulu-Natal awarded him its highest honour, Doctor of Music (honoris causa) in April 2017.

Speaking during the UKZN graduation ceremony, Masekela asked the audience to consider several issues through which the excellence of African Heritage could be re-introduced into their lives, without abandoning the good inherited from the Western world.

Masekela spoke about the restoration and resilience of African Heritage, linking ethnic languages with praise poetry saying it was the universal genealogy of all African people.

‘Volumes of African-language history and literature books lie covered with dust and ticks in basements and warehouses all over the continent and parts of Europe. African artisanship lies dormant but awe-inspiring as are our arts and crafts, design and architecture,’ said Masekela.

He asked the audience questions about whether there should be places of learning where knowledge embedded in these initiatives could be pursued, while questioning whether African heritage really was primitive, heathen, backward and barbaric?

‘I humbly ask you on bended knees to carry these thoughts with you as you go out into the world and perhaps think about how humiliating it will be 20 years from today when your children are asked who they really are and their response is “They say we used to be Africans very long ago”.

‘Or do you already speak only European languages in your homes?’ said Masekela.

We extend our sincere condolences to his family and friends.