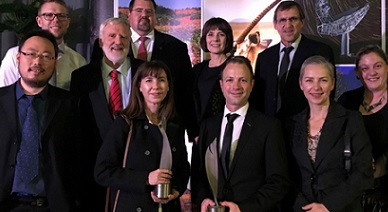 Prof Resia Pretorius from the Department of Physiological Sciences won the TW Kambule Award Award for researchers who contributed to research and its outputs over a period of up to six years. Prof Coenrad Fourie from the Department of Electrical & Electronic Engineering walked away with an award in the category: Innovation Award (Small, Medium and Micro Enterprise) for innovations and their research and/or development by teams, individuals or organisations.

Pretorius, a winner of the Department of Science and Technology’s Women in Science Award in 2017, was honoured for her discovery of the link between inflammation and non-infection disease like type 2 diabetes, Parkinson’s disease as well as Alzheimer’s disease. She showed that tiny amounts of bacterial cell wall molecules, which are shed by (dormant) bacteria in blood entering the body can cause blood to form clots that can cause diseases. This contributes to chronic inflammation that is part of many supposedly non-infectious diseases.

Rated as an internationally acclaimed researcher by the National Research Foundation (NRF), Pretorius has published 247 articles in high-impact accredited international journals like Lancet and New Scientist and has contributed 8 chapters to books. IN 2017, five patents were registered that resulted from her research. Pretorius has also supervised many young MSc and PhD candidates, among them several young female African students.

Before he started SUN Magnetics, Fourie developed software called “InductEx” that verifies the correct layout of integrated circuits. This software is used by physicists and engineers around the world and SUN Magnetics now counts among its clients the computing giant IBM and the world’s leading metrology institute: the National Institute of Standards and Technology in Boulder, Colorado in the USA. Through its dividends, SUN Magnetics contributes to the finances of SU.

Also rated by the NRF, Fourie has published extensively in international peer-reviewed journals and supervised a number of postgraduate students.