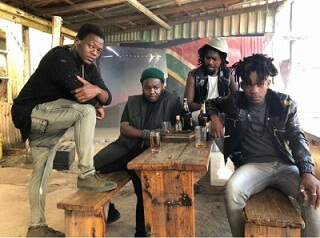 Student Thandolwethu “NT” Jikwa is one of the stars of Mzansi Magic’s DSTV popular drama series, Nkululeko. Nkululeko is a coming of age story...

Nkululeko is a coming of age story set in the dusty streets of one of South Africa’s most infamous townships, Khayelitsha. The story is about a young boy who jeopardises his bright future as a result of one impulsive decision.

Thandolwethu plays the character of Thando the informant, who is just a typical township guy who is part of a gang and a right-hand man to the gang’s leader, Zuks. Thando does anything for Zuks. However, when it comes to making money, he snitches on everyone to the cops without thinking twice.

The second-year Human Resource Management student says he enjoyed starring on the show alongside the industry’s veterans.

“It was a very nice experience because I got to work with the legendary actors Chris Gxalaba, Tina Jaxa, Sizwe Msuthu, Thoko Ntshinga and others, so you get to learn a lot of things from them and the other young co-actors too,” he says. “So it’s tremendously exciting to be around people who have the same vision as you.”

He adds that the CPUT Arts Society prepared him for his journey on the small screen. Last year he played the lead role in a theatrical play The Spirit of Shakespeare in Africa. The play, which was directed and written by Thami Mbongo and choreographed by Mhlanguli George, went to the National Arts Festival and the Cape Town Fringe Festival.

This experience secured him another role in a theatrical dance production by Mhlanguli George in which he played the role of a spirit caller. “I learned a lot while working on that play, being disciplined, focused and that loving and nurturing your work is important.

Thandolwethu says that while growing up as a young boy, he would often imitate movie actors in front of the mirror. However, he credits the CPUT Art Society for nurturing his craft.

Catch Nkululeko on DSTV channel 161 every Wednesday at 23:00. The series, which has 13 episodes, was first screened on the channel every Sunday at 20:00 earlier this year.