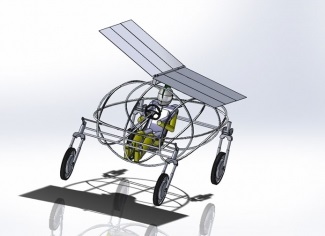 CPUT students and staff members will take part in this year’s Sasol Solar Car Challenge 2018, South Africa for the first time. Held every...

Held every second year, the competition sees teams from across the world design and build solar-powered vehicles to drive across South Africa in an eight day event.

Prof Graeme Oliver of the Mechanical Engineering Department has put together a team of 20 staff members and students to compete against the more than 20 local and international teams expected to participate.

Oliver initially signed CPUT up for the competition back in May, but only received confirmation of Technology Innovation Agency (TIA) funding at the end of June, leaving two months to put together the car.

Since the project is not integrated into a particular course or subject, students from Mechatronics, Mechanical and Electrical Engineering have volunteered to work on the team with the help of the TIA Adaptronics AMTL research unit based at CPUT.

“Because this is our first time entering the Challenge there is a lot of extra learning to be done. Until you have the actual thing in your hand, you can’t always tell what you need. So, we need to build the car. In two years’ time we will probably have all exact motors and solar panels and experience we need,” said Oliver.

“Because we’ve got the history in the automotive industry we became involved in this project,” said Erfort who will handle logistics for the CPUT team entering the Challenge.

The solar electronic car which they will build for the Sasol Solar Challenge 2018, South Africa will be called CPUT Solar Flyer “because it looks a bit like a plane.”

Mechanical Engineering lecturer and project organiser Felicity Harris says if all goes well then this could be the start of future projects of this nature which can be incorporated into coursework.

In addition to helping organise the actual trip Harris is putting together an academic engagement plan.

“Part of the bigger plan is to use the project to create awareness around studying engineering at CPUT. After the competition we will take the car to schools as a talking point,” said Harris.

The 20 strong team is hard at work in the Adaptronics AMTL building, when teaching and learning schedules allow, but not all will travel to Pretoria for the actual road trip.

The team who do eventually make the journey will drive the car from Pretoria to Stellenbosch between 22 and 29 September, covering a set distance every day, and we will be able to follow their progress via social media and the CPUT website.