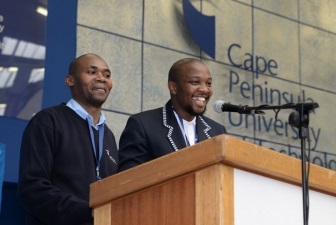 CPUT Men say no to violence

“There is a new man at the Cape Peninsula University of Technology.  A man who takes responsibility for his actions. A man that will...

“There is a new man at the Cape Peninsula University of Technology.  A man who takes responsibility for his actions.

A man that will not participate in, approve of or remain silent about any form of violence.”

This is the introduction of the commitment pledge that was recited at the launch of CPUT’s Men’s Forum yesterday (August 16).

The Forum aims to involve men to be part of the solution in the fight against gender-based violence.

At the function, which also saw the launch of the Institutional Gender-Based Violence Position Statement, Vice-Chancellor, Dr Chris Nhlapo said the institution wants to produce graduates who are good citizens.

“We don’t want to produce people with PhDs but they are not good human beings.”

The university has already started a campaign, called the Amajita Men’s Campaign, and a number of discussions amongst and about men have taken place.

“We’re discussing as men issues about treating our ladies. We are going to ensure that we take care of them,” said Nhlapo.