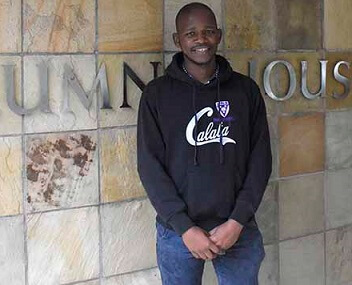 Archives2263
Zweli Hlatshwayo has been awarded the Fulbright Foreign Student Scholarship to study the Chemistry PhD programme at Ohio State University as of August 2018...

Zweli Hlatshwayo has been awarded the Fulbright Foreign Student Scholarship to study the Chemistry PhD programme at Ohio State University as of August 2018 with full funding.

Mr Hlatshwayo has been a tremendous inspiration to his family, fellow students, lecturers and supervisors throughout his academic career thus far.

Born and raised in Swaziland, Mr Hlatshwayo’s initial schooling was far from ideal. “The local primary and high schools I attended were very under-resourced and there was very little structure to lessons.”

In Grade 11 and 12, Mr Hlatshwayo got the opportunity to attend a private school. “The difference between my schooling up till then was huge. Suddenly, I was behind the other students,” he said.

In order to catch up, Mr Hlatshwayo worked out a stringent study schedule and only slept between 23h00 and 3h00 every night. “I had to give up sleep so that I could pre-study for every lesson of the upcoming school day. All classes were exclusively in English, which was not my home language, and I had to catch up two years of study material in a single year.” Mr Hlatshwayo did this faithfully for his entire Grade 11 year.

“It ended up not being such a bad thing. My body had gotten used to waking up at 3am, so in Grade 12, I kept waking up at that time and pre-studying and pre-preparing for every lesson, as I had done in Grade 11. This put me well ahead of my classmates in most of my subjects,” he said.

However, Mr Hlatshwayo did not excel sufficiently in English (as a home language), which meant he did not get a university exemption when he wrote his matric the first time around. “I was misinformed,” he recalled. “I believed that English as a Home Language was necessary for university exemption, which it turned out, it was not. I should’ve taken a technical subject instead. English as a Home Language at private schools, which is done according to the Cambridge syllabus, is a challenging undertaking, even for a learner who speaks English as a mother tongue.”

Initially, Mr Hlatshwayo was upset. However, in the spirit that would become the quality to garner him so many awards, Mr Hlatshwayo used his struggle to help others. “I felt as if I had needlessly lost two years of my academic life. But then, I decided to turn my frustration into a positive experience that I could use to help make sure that it never happens to others,” he said.

Mr Hlatshwayo and his brother then put together an online information resource for Grade 9 learners in Swaziland in 2012, to help them build a route to their desired academic career. They called it Ngwanya Academy.

After he obtained his university exemption, Mr Hlatshwayo decided to study his Bachelor of Science at Rhodes University in 2012, where he completed his Master of Science in 2017.

While at Rhodes University, Mr Hlatshwayo was awarded the following merits:

2017 – Hult Prize from the Hult Foundation, and the prestigious Fulbright Scholarship

“The Fulbright Scholarship is not just a thing from the movies – it is accessible to people like me,” said Hlatshwayo. “It has always been my dream to do my PhD in the US or UK, and not in Africa. I feel as if we are growing in Africa, but there are more opportunities to learn about other cultures in the US, since that is where the world gets together.”

Mr Hlatshwayo plans to bring back the knowledge he gains in the US to South Africa, where he plans to develop a multipurpose cancer institute that will conduct cancer drug research, raise awareness about cancer, treat cancer, collect data to influence policy and train medical professionals. “I do believe we can build more multipurpose cancer institutions in South Africa and Africa in general,” said Mr Hlatshwayo.

“My institute will bring people from all over the world, and I’m going to be ready to welcome them. Now is my opportunity to also learn about other cultures so that I can ensure the international researchers that come to my research facility are comfortable enough to put their best work forward.”

Always humble, Mr Hlatshwayo would like to thank all of those who he believes helped him secure the Fulbright Scholarship, including his family, Dr David Khanye, Dr John Mack, Dr Ngoy, and Dr Oluwole.

But most of all, he would like to extend his gratitude to the woman who feels “made him”, his supervisor Distinguished Professor Tebello Nyokong. “She took time to groom me as a leader and young scientist,” he said. “She is an inspiration to many of us and where ever I happen to land in future, I will always proudly claim that I ama product of Professor Nyokong.”