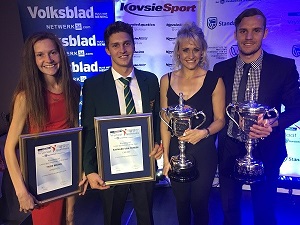 University of the Free State: KovsieSport crowns their best

Archives2263
The athletes Rynardt van Rensburg and Lynique Beneke walked away with the two major awards at the KovsieSport honours function on Wednesday 26 August...

The athletes Rynardt van Rensburg and Lynique Beneke walked away with the two major awards at the KovsieSport honours function on Wednesday 26 August 2018.

The two were announced as the Kovsie Sportsman and Sportswoman of the Year. Both of them represented South Africa at international level in the past 12 months and were the national student champions in their items.

Van Renburg’s major achievement was the 1:45.15 he ran in the 800 m at the Hengelo World Challenge meeting, which is the 32nd fastest time in the world in 2018 and also his personal best. Beneke, among others, earned a bronze medal at the African Senior Championships in the long jump and won the item at the National track and field championships for a sixth consecutive year.

Tyler Beling, another athlete (middle distance), was named the Junior Sportswoman of the Year while cricketer Raynard van Tonder was the best Junior Sportsman. Van Tonder captained the South African team to the U19 Cricket World Cup, where he scored the third most runs at an average of 69.6. Beling is the country’s best junior in the 1 500 m.

Other nominees on the night were: