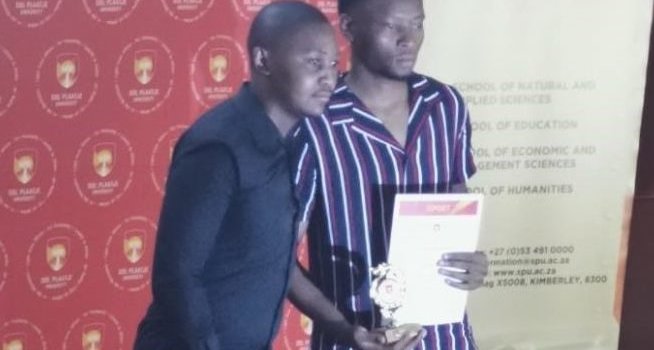 SPU football player of the year reflects on 2019

For as long as he can recall, SPU’s 2019 soccer royalty, Okuhle Lwana always had a passion for football. Born in Flagstaff, situated in...

For as long as he can recall, SPU’s 2019 soccer royalty, Okuhle Lwana always had a passion for football.

Born in Flagstaff, situated in the Eastern Cape, Lwana states that much of his football inspiration is attributed to his older brother, who was once a football player.

“As a child, I would always watch his matches and sometimes had the privilege to attend his training sessions. I was very much obsessed with the game,” states Lwana.

His passion and love for the game saw him bag the 2019 Football Player of the Year award at SPU’s 2019 Sports Awards ceremony.

This was a major highlight for his football journey after a successful 2019 season.

“The award came unexpectedly and is something I’ll remember forever. It has surely boosted my confidence as a football player,” comments Lwana.

Lwana’s long-term goal is to complete his degree in Biological Sciences and become a professional football player.

“For now, I look forward to achieving success at the SAB Regional league Frances Baard District this season as our team is currently sitting in third position,” concluded Lwana.

With a lot of uncertainty regarding the COVID-19 pandemic in the country, Lwana is hopeful that the team will still be able to complete the season and compete at the second USSA National Football Championship in December this year.