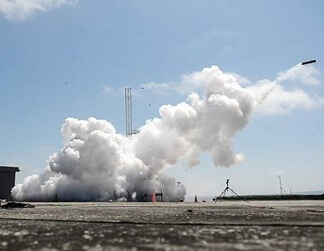 Despite the unsuccessful test launch of the Phoenix-1B sounding rocket, the project still remains important to South African engineering.

The Phoenix Hybrid Sounding Rocket Programme seeks to develop a series of indigenous sounding rockets to serve the needs of the South African and African scientific research communities.

There are currently no sounding rocket programmes in Africa.

On Monday, developers from the Department of Science and Technology (DST) and the University of KwaZulu-Natal said they were undeterred by the unsuccessful test at the Denel Overberg Test Range in the Western Cape.

The system, which is developed by postgraduate students from UKZN’s Aerospace Systems Research Group (ASReG), was expected to reach a 15km altitude and a velocity of twice the speed of sound but failed despite igniting successfully.

Shortly after motor ignition, the rocket left the launch rail but the motor shut down, resulting in the loss of the vehicle, the DST said on Tuesday.

A preliminary investigation by the engineers indicates that this was caused by a malfunction in an electrically actuated oxidiser flow control valve located between the propellant tank and the motor.

The valve closed unexpectedly, starving the propellant motor and shutting off the thrust.

The cause of the valve malfunction is being investigated so that the fault can be eliminated.

The Phoenix-1B Mk II is the third rocket variant to be developed by the group.

The first, the Phoenix-1A, was flight tested in 2014 but experienced a nozzle failure, which limited altitude.

Lessons learnt then and through the Phoenix-1B will be used to develop and launch in 2020 the practical and cost-effective Phoenix-1B Mark I, the Director-General of Science and Technology, Phil Mjwara, said.

Mjwara said despite the failed test, the programme was still important in building specialised skills for the economy.

“It is part of the game where launching rockets is concerned. Hopefully, we will learn a lot more when we investigate what could have caused this,” said Mjwara.

Mjwara explained that the ASReG programme is a multi-pronged strategy through which South Africa is developing human capital, and projects like the Phoenix-1B provide opportunities to do just that.

Government, he said, will continue its partnership with UKZN and is pleased with the investment, which is resulting in the development of critical research and development in engineering particularly, infrastructure and technology development.

The Phoenix-1B Mk II rocket was developed as a technology demonstration platform.

Sounding rockets are rocket-propelled launch vehicles which carry experimental payloads to the upper reaches of the atmosphere or into space. Scientific fields that use such rocket platforms for experimentation purposes include astronomy, astrophysics, biotechnology, materials sciences and meteorology.

DST is funding the ASReG programme, which has enabled UKZN to develop key expertise in the engineering disciplines of rocket propulsion technology, launch vehicle design and flight dynamics modelling, as well as the development of appreciable human capital.

It has also enabled unique cooperation between the university and industry.

Since the programme started in 2010, lead researcher Jean Pitot said a number of students are now working in key technical positions in institutions such as Armscor, the National Metrology Institute of South Africa and Rheinmetall Denel Munition.

“Developing advanced engineering skills in our graduates is the main objective of the programme, including raising performance levels by implementing refined designs and employing special manufacturing technologies,” said.

Senior lecturer at the university’s Engineering Department Mike Brooks said it was possible for South Africa to develop and launch hybrid test rockets. However, these vehicles are complex and high-energy machines.

“During their launch and flight, sounding rockets must survive on the edge of what is technically possible, and that makes them challenging to engineer,” said Brooks.

The objective is for South Africa to be counted among countries like Japan, Sweden, Norway, Brazil, the United States of America and Australia, who have their own indigenous sounding rocket programmes, and no longer rely on international launch services.