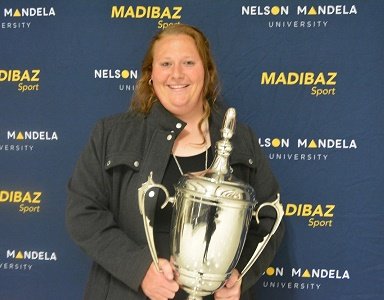 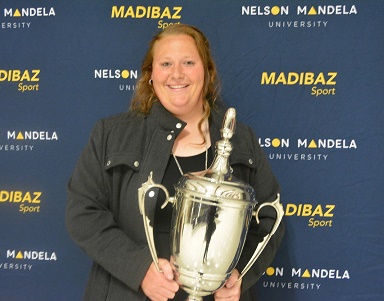 Star field athlete Ischke Senekal was honoured with a top award when she was crowned Sportswoman of the Year at the Madibaz Sport gala...

Star field athlete Ischke Senekal was honoured with a top award when she was crowned Sportswoman of the Year at the Madibaz Sport gala awards evening in Port Elizabeth last week.

“The award means a lot to me as I’ve worked hard to reach the heights I set for myself. It also showed me that my goals made me win that title,” said the Uitenhage local.

“I’m now recognised as this year’s best sportswoman at the university and I had tough nominees against me. So I’m happy it turned out the way it did,” said Senekal, who was nominated for the award last year but had never won it prior to this year.

The 25-year-old, who also won national colours at the IAAF World Cup in London and claimed gold for shot put and bronze for discus at the African Senior Championships, felt she was not in her best form at the beginning of the season.

“I still managed to go on to reach what I wanted to achieve. I wanted to go to the world cup, continental and African champs. I was in the preliminary team for the Commonwealth Games, but they unfortunately didn’t choose me to participate.”

Senekal, a second-year education honours student and Grade 2 teacher at Ankervas Primary School, added that she had achieved most of her goals. She wanted to be the SA and USSA champion again, as well as to finish in the top three at the African champs.

“One thing I didn’t achieve was a shot put record, but I was a little far behind. It’s one of my goals for next season.”

Her best memories from this year included going to the world cup where she placed fourth, becoming African champion for discus and competing in the continental cup.

“It was a great moment and honour to represent my continent in the Czech Republic,” said Senekal.

Senekal attributed her success to three key factors in her life – her family, coach and supporters.

“These are people who have wished me success and have honoured it. They make me believe I can do anything I put my mind to, while guiding me through difficult times.

“My coach Kobus van Zyl is the most amazing man. He believes in me, especially when I doubt myself. He will always have positive things to say and know that I can achieve everything no matter how big the dream is,” she said.

Van Zyl was also the one who discovered her when she was 16 at Brandwag High. He saw her competing, walked over to Senekal’s mother and told her that he could make her a South African champion, which she became shortly afterwards.

“I also need to thank the university and athletics manager Nellis Bothma who has always been behind me and just wants the best for me. He made it possible for me to study while I’m achieving my dreams.”

To continue competing at the top level Senekal believes it will take a lot of hard practice and that she’ll need sponsorship.

“It’s difficult as I also have extra-curricular activities and commitments. The finances are another issue. I will need to get sponsors who will help take me to the heights I want to reach.”

Her goals for next year include becoming SA champion for the fifth year in a row, competing in a world cup and participating in a European season.

“I’d like to compete at a higher level in order to become accustomed to it and ultimately learn how to compete against [top opposition].”