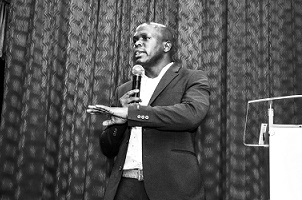 Vaal University of Technology E-Skills graduates received an inspirational send off at their graduation ceremony last week. They were addressed by keynote speaker Mr...

Vaal University of Technology E-Skills graduates received an inspirational send off at their graduation ceremony last week. They were addressed by keynote speaker Mr Sihle Tshabalala who has become well known for this transformation from convict to coder.

Mr Tshabalala, the co-founder and CEO of Quicky 30, a digital training company, previously spent 11 years in prison for armed robbery.

During his time in prison he became a member of the Group of Hope programme, an initiative which helps prisoners to complete their education and develop entrepreneurial skills. He started beading jewellery and, without any teaching qualifications, taught English and Mathematics to his fellow inmates in an effort to turn them away from crime and offer them a new chance in life.

He has also taught himself how to code and is the national co-ordinator for a youth organisation called Brothers for All which aims to transfer skills to young people. He teaches ex-prisoners computer and coding skills.

Mr Tshabalala has won several awards for his efforts, such as: 2014 LeadSA’s Hero, 2015 Spark Changemaker award and Mail and Guardian 200 Young South Africans award, to name but a few.

Mr Tshabalala said to graduates they should strive to be entrepreneurs and develop the economy of the country. “There are certain qualities that entrepreneurs require which are: hustling, risk-taking and good networking skills. Be that person who will become the next great successful entrepreneur,” he said.

He closed his speech by saying that he is still on parole but has managed to travel the world. He said the prison has shaped his life to be a better person. He left students with these words: ‘If you are looking for a miracle in life and you can’t find one, be that miracle.’

VUT has built a strong partnership with NEMISA (National Electronic Media Institute of South Africa) to offer the E-Skills course. NEMISA is a non-profit organisation that provides technological skills to unemployed and unskilled people across the country.

Vice-Chancellor and Principal, Professor Gordon Zide also gave words of encouragement to the graduates, telling them to go out into the world and be the best they can be.