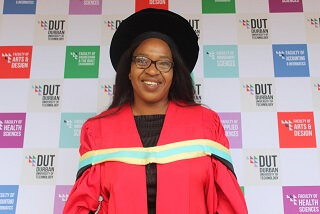 Archives2263
Dr Zithobile Mkhize-Ngidi, who recently graduated with her PhD in Public Administration (Peace Studies) in the Faculty of Management Sciences at the Durban University...

Dr Zithobile Mkhize-Ngidi, who recently graduated with her PhD in Public Administration (Peace Studies) in the Faculty of Management Sciences at the Durban University of Technology (DUT), will be hosting a seminar on her research into school violence in South African schools. The seminar will take place on Wednesday, 03 October 2018 at DUT’s ICON Boardroom, ML Sultan Campus in Durban.

Dr Mkhize-Ngidi’s research into violence in schools was prompted by her witnessing the constantly escalating levels of violence in some South African high schools, especially violence that was related to drug and alcohol abuse. Her research topic was, “Reducing School Violence: A Peace Education Project Amongst Stakeholders in Umlazi.”

The Vikingozi Secondary School Deputy Principal explained the rationale behind her chosen research topic, “As an educator, I have seen this increase in school violence first-hand and I wanted to dig deeper into the causes of school violence, and the steps that could be taken to reduce it. I also wanted to pay careful attention to the roles and responsibilities of all stakeholders in the education system (educators, parents, community members, the Department of Education and the learners themselves) in reducing this pandemic.”

Dr Mkhize-Ngidi said her study sought to give all the stakeholders involved in the education sector a new perspective on violence, possibly offering a solution that is both restorative and effective. Adding that the study equipped various participants with the knowledge and tools to intercept potentially violent incidents before they escalated to a more detrimental state.

“The study used the ‘cure violence model’ and stated that violence is like a contagious disease, and therefore, it needs to be attended to as such. Educators and learners need to identify the infected stakeholders that need to be assisted. As observed in similar investigations, the implementation of this model has a notable positive effect in the school environment. It is assumed that by reducing the levels of violence in the school, this also has an impact in reducing the physical and psychological effects, educational damage and societal breakdown that come with it. The beauty of this model is in its ability to be used in any setting, across many dividing lines,” she said.

Dr Mkhize-Ngidi said her future plans included mentoring new researchers, particularly those focused on research in education and in our schools. She also wants to work with other experienced researchers to produce publications that will influence the curriculum, with the aim of teaching learners as early as in grade R, skills such as anger management, mediation and conflict resolution, in order to help reduce the levels of violence in South African schools.