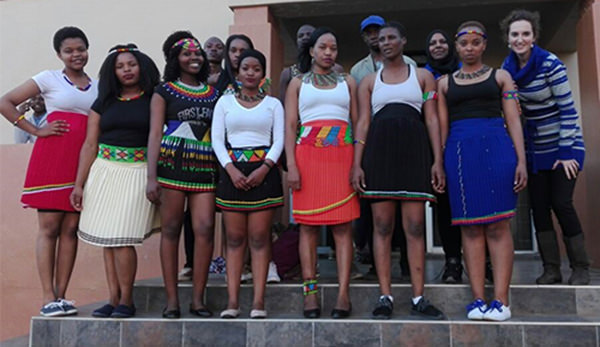 Being blind doesn’t mean that I can’t exercise.” This attitude has just enabled a visually impaired student, Rebone Mogale, to steal stole the show at the annual arts and cultural dance-off that took place at the Tshwane University of Technology’s Department of Primary Education at the Soshanguve North Campus.

The annual arts and cultural dance-off forms part of the Introduction to the arts and culture module in the B.Ed GET: intermediate/senior phase. All first-year students register for this subject, which aims to use drama and other art forms to build confidence in students and other essential elements toward preparing them to become effective teachers. These skills include voice projection, body language and facial expression to become good facilitators of learning.

As part of the Youth Day celebrations, the class of about 130 students was divided into various groups, in which they chose a style of dance and song for their performances. The students performed for fellow students, lecturers, friends and family. There was plenty of variety, such as IsiZulu, Tsonga, Tswana, Kwaito, Sarafina, Gumboots and Pantsula styles, which were all performed exceptionally well. There is no doubt about the abundance of talent among these groups of students. There was an electric vibe running through the crowd and the afternoon to evening event celebrated the joys of dance and song.

Bianca O’Neill, Lecturer and organiser of the event, pointed out: “I’ve had several students with various other disabilities over the years but it is the first time a fully visually impaired student is in my class, I was surprised and initially worried if she would be able to complete the course.”

Fortunately, Mogale was up for the task and surprised her lecturer and fellow peers. The Campus also has a department for special cases like these, referred to as Student Development and Support (SDS). O’Neill goes on to say that, “SDS has been more than helpful, they have the facilities and personnel to assist with cases like Rebone’s.”

Mogale had no doubt that she was going to excel in the course and performance as she has competed in many activities through the years. “Being blind doesn’t mean that I can’t exercise, I also do aerobics. In primary school, I was doing athletics, shot put, and competing in 100m races.”

Mogale found the course interesting and enjoyable but sometimes it has been challenging because she could not participate in one or two activities that may have caused her harm. She even joked that her disability was actually an advantage. “During the performances I didn’t have that much stage fright. It’s just easy because I can’t see the audience.”

Mogale enjoyed the event but could not really experience it like her peers. It was challenging for her as she could not see the moves but she could feel the beats on the floor as the feet stomped on the stage and she could tell if the performers hit their mark or not.

She noted that she only faced a few challenges during rehearsals as some of her group members were not used to working with someone who has a disability. Mogale adds that some of the group members were initially scared to be grouped with her as they feared she would not be able to perform as well as they would. She asked them to demonstrate to her so she could learn the choreography and after a while everything became natural. Mogale credits one of her group members, Lukho Siandela, for assisting her throughout.

Mogale’s presence has raised awareness about those living with disabilities, especially the visually impaired. According to her students should not be apprehensive when grouped with a person with a disability as she concluded by saying “I’m only blind, my mind is not blind. I can think and I can do anything that other students can do.”