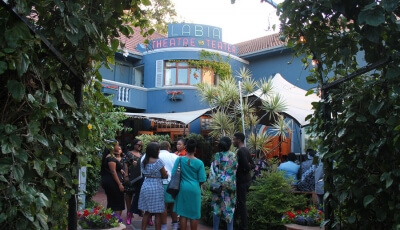 Cape Peninsula University of Technology fashion students recently got a chance to watch their showreel at The Labia cinema in Cape Town. Third year...

Cape Peninsula University of Technology fashion students recently got a chance to watch their showreel at The Labia cinema in Cape Town.

Third year and BTech Fashion students each had to work on a short video clip explaining their design collection and these were put together into a film which was screened to parents, staff and students for the first time.

The “film premiere” took the place of the annual fashion show which the Design Department used to organise for Fashion students to strut their stuff.

Fashion programme leader Annadine Vlok says they had not been able to do the annual fashion in the Multi-purpose Hall on District Six campus for several years so they decided to try something new.

They used the money earmarked for the fashion show to pay CPUT Film & Media students to partner with the Fashion students to create short film clips. The brief was each student had to present their work in a clip that was one to two minutes long.

“It’s fresh. No other fashion school makes a film about the students’ work in this way. It showcases the garments in a better way,” explained Vlok.

The short films ranged in style from short stories to psychedelic, colour-saturated pop-up videos showcasing various garments. Film students matched up garment themes to film techniques, all in service of showing off the clothes the fashion students had designed.

The Fashion lecturers helped the Film and Media students with advice and lecturer Shaun Smith compiled the film, even stepping in to help finish some of the clips.

Vlok said lecturers Jas Myburgh and Walter Buchholz also helped coordinate the films and the programme would definitely try this again next year. They would also work with the Film and Media lecturers to co-ordinate their schedules to make the fashion film project a bridge between the programmes.

The film was played on a loop when the Design students’ work was displayed at their year-end display at Media City and will eventually find a home on CPUT’s Youtube channel.