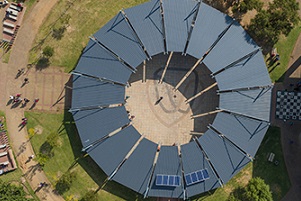 Renewable energy systems an economical investment for the UFS

Archives2264 renewable energy4 University of the Free State11
Renewable energy systems are said to be very expensive to implement initially, but in the long run they provide high economic returns. With their...

Renewable energy systems are said to be very expensive to implement initially, but in the long run they provide high economic returns.

With their decision to install renewable energy, the University of the Free State Department of Facilities Planning has now also adopted this innovative technology. They have chosen less capital-intensive solar power-generating options to generate electricity in various buildings and parking areas on all three UFS campuses.

South Campus taking the lead in renewable energy usage
In December 2016, a total of 26 solar-driven LED street-light poles were installed at the recently built Legae Residence’s parking area and the perimeter security area on the South Campus. This low-maintenance system improves security after dark and is independent of the national power supply, which is an important advantage during power outages. With no requirements for major earthworks and cable setting, operational costs are reduced.

The recently built infrastructure also takes pride in being the first to have a greywater system installed.  This system will also be installed at three other residences on the Bloemfontein Campus in 2017. Greywater is made up of bath, shower, and bathroom sink water. The water is reused for toilet flushing, as well as for irrigation purposes.

Various UFS electrical operations to depend on solar power
On the Bloemfontein and Qwaqwa Campuses, the computer laboratories as well as the Thakaneng Bridge Student Centre and the projected Afromontane Research Centre will be equipped with freestanding roof solar solutions during 2017. These systems are designed to operate independently of the power grid (Eskom).

The systems only operate during sunlight hours when the PV solar panels are heated by the sun, making them suitable for operations such as ventilation fans, water pumps, and small circulation pumps for solar thermal water-heating systems.

Source: University of the Free State