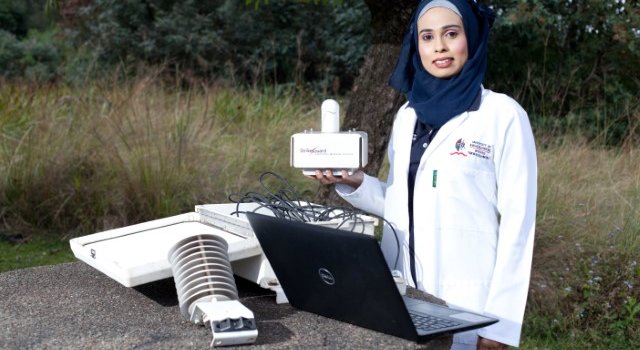 ‘My honours and master’s research focused on tackling challenges within the water cycle,’ said Mahomed.

‘I researched satellite earth observation data as an alternate way to obtain critical hydrological estimates for the effective management of droughts and for the allocation of water resources in South Africa.’

For her PhD – which she started in July 2018 – Mahomed changed tack, choosing to explore a different project in order to advance her research and innovation skills. She chose a scarce yet fascinating and crucial element – lightning.

Mahomed explained that South Africa had a lightning mortality rate four times higher than the global average and the second highest number of lightning deaths per capita. Despite the country having made considerably more progress in the field of lightning research than most African countries and possessing one of the three ground-based lightning detection networks in the southern hemisphere, rural communities in South Africa, and on the African continent, are still vulnerable to lightning.

‘In an attempt to improve detection and warning of lightning threats at a local/community scale, a system with monitoring and predictive capacity to detect lightning occurrences and assist rural communities in preparing for lightning through risk knowledge and near real- time/early warning systems is ultimately needed,’ said Mahomed.

Her PhD research focused on the development and assessment of a community ground-based near-real time lightning warning system (NRT-LWS) to detect and disseminate lightning threats and alerts in a timeous and comprehensible manner within a rural community in KwaZulu-Natal.

‘The system is comprised of an electrical field meter and a lightning flash sensor with warnings disseminated via audible (siren) and visible (beacon lights) alarms on-site and with a remote server issuing SMSs and email alerts,’ she explained.

Mahomed’s research contributed to the first ever community-based lightning early warning system and provided insight into lightning detection and monitoring at a local/community-level for South Africa.

It also provided a first insight into the use of the South African Lightning Detection Network (SALDN) for local scales, encouraging the South African Weather Service (SAWS) to expand its lightning warnings to rural communities across the country.

Furthermore, the study investigated lightning as a short-term predictor to tornadoes and supercell events for South Africa.

Mahomed’s research has attracted a lot of interest in the media, featuring in The Mercury newspaper under the most read articles and as the editor’s-choice in Women in Science, an online portal that provides the first-ever comprehensive database of women in science on the African continent and recognises women’s participation in scientific fields by spotlighting their challenges and achievements. Her research was also selected as the editor’s choice in the January/February 2021 edition of the South African Journal of Science.

Mahomed has won prizes at every conference she has presented her research at, including the 4th National Global Change Conference (2018); the 35th Annual Conference of the South African Society for Atmospheric Sciences (SASAS-2019); the annual research day of the Durban Research Action Partnership (D’RAP 2019 and 2020); as well as the UKZN College of Agriculture, Engineering and Science Postgraduate Research and Innovation Symposium (PRIS-2020).

‘A particular honour was to present my research on request to the US lightning safety council that consists of lightning experts who have more than 40 years of experience in lightning,’ said Mahomed. ‘The study’s research efforts were praised and appreciated, with further discussions on how better to manage future lightning detection on local-scales in South Africa.’

With her PhD completed in under three years, Mahomed said she was particularly indebted to her supervisor, Dr Alistair Clulow. ‘He was the one who provided that spark and enthusiasm which led to me undertaking this research,’ she said. ‘In addition, without his technical assistance, this study would not have been completed.’