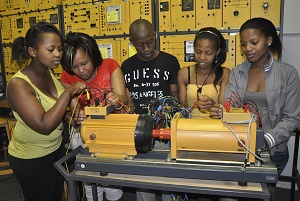 Higher Education works for an A at TVET colleges

Archives2263 Buti Manamela4 National Development Plan1 TVET19
Winds of change will soon blow over the country’s Technical Vocational Education and Training (TVET) colleges as the department in charge of these institutions...

Winds of change will soon blow over the country’s Technical Vocational Education and Training (TVET) colleges as the department in charge of these institutions wants to see them perform at a much higher level.

Higher Education and Training Deputy Minister Buti Manamela says the department is working towards making TVET colleges better, as government has invested substantial resources into these faculties to make them a viable and sustainable arm of the post-school education system. Government has billed TVET colleges as the ones to watch when it comes to producing the technical skills needed to plug the skills gap in the economy.

According to the department, there are 50 registered and accredited public TVET colleges in South Africa which operate on more than 264 campuses spread across the rural and urban areas of the country. Public TVET colleges are subsidised by the State with approximately R8 billion per year.

The National Development Plan (NDP) envisages the dramatic expansion of TVET to reduce South Africa’s skills shortage, seeking to increase enrolments to 2.5 million in 2030, a significant increase from the 700 000 students enrolled in 2014.

Manamela said the aim of the Colleges of Specialisation project adopted by the department is meant to respond to the demand for priority trades and to fulfil the National Infrastructure Plan more particularly.

The Colleges of Specialisation also serve to build capacity in the public TVET college system to deliver trade qualifications with employer partners.

Following a period of intensive research, the department has established 13 trades that are particularly in short supply.

“By the end of June 2018, the curricula for each trade will be updated to industry standards, a process which industry partners have led. The transformation of the curricula is imperative for greater alignment with industry needs,” Manamela said.

Manamela said the department will do its best to meet the Medium Term Strategic Framework (MTSF) target of a 65% certification rate for NCV (National Certificate Vocational) Level 4, as well as N3 and N6 qualifications.

“We have responded to the certification backlogs and over the years, the department has steadily addressed the problem.  While this challenge has largely been resolved, we still receive queries.  We will attend to and satisfactorily address all outstanding and unresolved certification issues.”

Manamela said that the department is aware of governance challenges faced by many colleges as the TVET system expands.

The department is developing a Framework for Good Governance and will conduct an initial assessment of all TVET colleges against this framework.

“TVET colleges are community resources and their success is our success. We have heard the pleas for a better TVET college system and having fixed some of the problems, we will continue to strengthen the system,” Manamela said.

He further encouraged parents and youth to strongly consider taking up their education at the country’s 50 public TVET colleges.