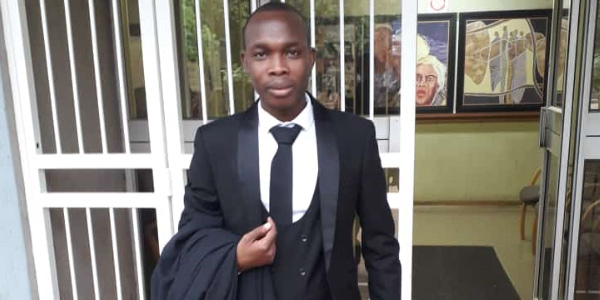 GautengUniversity of the Witwatersrand May 15, 2020 News desk

A member of staff of the Wits Law Clinic is the first attorney in Gauteng to be admitted to the high court online. Mbavhalelo...

A member of staff of the Wits Law Clinic is the first attorney in Gauteng to be admitted to the high court online.

Mmbadi, who had been serving his articles at the Wits Law Clinic since 2018, became the first attorney in Gauteng to be admitted to the high court online.

Mmbadi says the extension of the national lockdown made it seem unlikely that he would attain his attorney title but fortunately, the online system restored his hope, despite being unconventional.

“The possibility of a video conference admission left me conflicted. I was disappointed that I would not have my picture taken outside the High Court as is custom, but also excited to experience first-hand, the new way of online admissions. We did joke about this with my colleagues, and they joked about ‘photoshopping’ my picture outside court,” he quips.

Mmbadi’s admission oath was administered online via Microsoft Teams after the Judges admitted him. Although he never envisioned his admission as an attorney would be online, Mmbadi says he was nevertheless elated.

“I don’t think words can describe the feeling of being admitted as an attorney of the High Court. Though my legal career started some few years back, being admitted is like going over the hump. I guess if I had to use one word to describe how I feel, I would say ’superfantabulicioustic’‘!” he said.

Mmbadi, who hails from Venda, says that serving his articles at the Wits Law Clinic, a pro bono institution has been a rewarding experience because he can ignite hope for people who have almost given up.

“It gives me an opportunity to give back to the community. I always tell people that I sleep so much better when I have made at least one person smile. Being a professional legal assistant for a pro bono institution helps me put a smile on people’s faces. For me, law is more than just a career; it is a way to help the people that really need assistance.”

The urge to help people and impact lives and communities positively motivated Mmbadi to pursue a career in law.

“Growing up, I have seen a lot of injustices, and always wanted to make a difference. Also, a law career gives prestige, stability and power.”

Mmadi, a former petrol attendant says he was introduced to the field of law when he took up a Labour Law course as a shop steward.

The endless opportunities that life has to offer has been a source of inspiration for him.

“I believe we are all here for a purpose, and life gives us an opportunity to find and achieve our purpose. It also gives us challenges, which in turn inspire us to do better.”