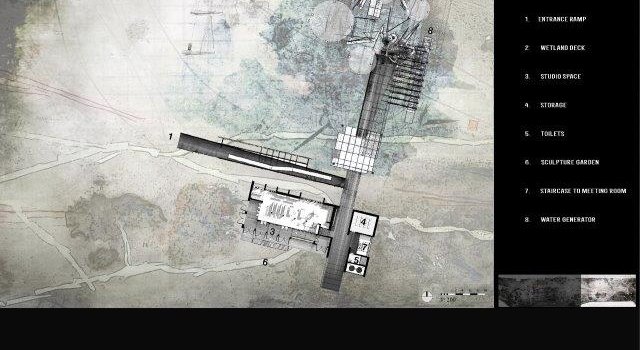 A thesis entitled ‘Montage, Collage in making Tarkovsky’s Zone: Sculpting a Cinematic Narrative Space in a Liminal Landscape’ by Katya Krat was selected regional winner from the School of Architecture at the University of Cape Town, receiving a R10 000 prize. Held on Friday 5 February, the event was part of the 34th Corobrik Architectural Student of the Year Awards.

Katya explains that her work took on a very theoretical approach that drew parallels between her heritage as a Russian-South African and the collective ecological and cultural history of marginal sites in Cape Town. She explored how alternative and experiential design methods inspired by the study of cinema can inform the creation of poetic and phenomenologically enhanced architecture, which connects multiple realities and time-based encounters.

Her research drew parallels between Soviet filmmaker Andrei Tarkovsky’s cinematic zone, the perceptual zone of the current Covid-19 reality and a physical Cape Town site containing the marginal Salt River zone. The latter’s industrial history is showcased in derelict constructions made from Corobrik products. These remnants comprise steel, iron and brickwork found in existing industrial artefacts, which were then reworked with the ephemeral addition of wood as a material to create a renewed interpretation both physically and metaphorically.

Katya comments that competitions like these allow students to push the potential of architecture and its impact within society outside of the boundaries of real-world constraints. “I believe that this kind of exploration stimulates creative thinking, inspiring a new generation of problem-solvers who can positively impact both academia and architectural practice. I would like to thank Corobrik for allowing us all to pursue this opportunity and reap its rewards.” As for the future, Katya highlights she would like to further her current research ideas and explore how architecture can act as a connector between humans and nature, both academically and at a ground level.

Billed as one of the most prestigious awards programmes of its kind in South Africa, the Corobrik Architectural Student of the Year Awards selects regional winners from eight major universities, based on the students’ final theses. These regional winners then go through to the national round, where the top title is awarded, in addition to a R70 000 grand prize.

Khanya Tshabalala was both first runner-up, for which he received an R8 000 prize, as well as clinching the R6 000 prize for Best Use of Clay Masonry, from the UCT School of Architecture. Khanya’s project, entitled ‘Healing Historical Narratives: Brokering Therapeutic Resources for Alternative Healing Practice’, is about rediscovering new ways to negotiate and integrate the indigenous practice of traditional healing into its relatively new modern urban setting. Here the use of clay bricks was developed as a placemaking strategy to channel the qualitative experiences of the sacred sites located outside the city and used by healers for ceremony and ritual practices.

“The experience offered by Corobrik, allowing students to share their work and ideas, is an invaluable support structure that recognises the engagements and investigations taking place at various architecture schools around the country. I believe these awards place the work done from various tertiary institutes into a dialogue of the potential futures of architecture. I would like to thank Corobrik for its contribution to the built environment and continued sponsorship,” concludes Khanya.

Corobrik has long played a pivotal role in recognising up-and-coming young architects in South Africa, notes Marketing Support Manager Thilo Sidambaram, who herself has been involved with the awards for two decades. The Covid-19 pandemic has meant that most of the regional events have had to be held remotely. “Despite the challenges posed, the country’s architectural students have still managed to excel, and Corobrik is proud to continue to support our universities during this difficult period.”

Look out for the National Corobrik Student of the Year Awards ceremony that will take place virtually in May.